I'd Be OK If They Removed April 16 From The Calendar

Tomorrow is April 16, and for me, if anyone wanted to start a campaign to remove the date from the calendar, I’d be all for it. Every April 16, I wake up and hear the same two phrases and can't get them out of my mind. It was a Monday, and I was the general manager of a local radio station called WAGE in Leesburg. Immediately that morning, phone calls started coming in from parents who had children at Virginia Tech, asking “what is going on in Blacksburg?”

We were clueless. There was nothing on the news yet, but the frequency of the calls and the nervousness in the voices indicated something big was going on. We all started making calls and soon word came out that there had been a shooting at the Ambler-Johnston dorm. One dead, shooter on the loose.

Thanks to a suggestion from friends in Blacksburg, we soon figured out how to listen in on police band transmissions at Virginia Tech. I connected with it on one computer and turned the sound up as loud as it would go. I then grabbed another computer and was able to pick up streaming video from a Roanoke television station so we might be able to hear or see things as they were happening.

While monitoring these, I selectively listened to each for a few moments at a time. I’d walk back and forth between there and the studio to see if they heard anything, and just as I came back to my desk, I heard the end of a transmission with a voice saying “31 black.” Nobody at the station knew what it meant. All we knew was police were only reporting one fatality.

As the day went on, and the casualty numbers kept increasing, it became apparent what the transmission meant. I asked a friend who works in EMS the next day, and was told it was terminology for triage in an emergency medical situation. “Red means critical injury,” he said. “Green means they’re not critical. Black means they’re dead.”

In Norris Hall that morning, 25 students and five professors lost their lives. Add in the shooter and the total was 31.

It’s now been 14 years and the event for many has gone from sharp pain to historical memory. But if you were a Hokie, it was perhaps the worst day ever, as the thought of such senseless loss was overwhelming. Virginia Tech now uses “This Is Home” as a marketing phrase, but back then to many of us, it truly was home.

It was where you went on a weekend to be greeted by rich memories, went over to Squires to look around and hear current students grumbling about “alumni” under their breath as you invaded their space, crossed the street to enter the bookstore and buy all the stuff you couldn’t afford back in the day, and feel “at home.”

Now we were watching in horror on every major television and cable network the details of a thief in the night coming into that world and senselessly taking the lives away of so many. I had a towel by my chair in my office for a week because it was so emotional to watch.

Even months later, when Virginia Tech played its first football game since the tragedy, I was up in the press box helping with stats for a national radio broadcast. They released 32 balloons before the game started, and the next thing I knew, I was feeling the guy next to me giving me a hug and saying “I’m sorry for your loss.” It was former Auburn coach Terry Bowden. I didn’t realize it, but tears were streaming down my face.

Time heals all wounds, but every year on April 16, the memories come back and those who lost their lives are remembered. And as is the case with such events, the memories are brought back in sharper focus on the anniversaries that end in 5 or 10 years. The fifth-year anniversary in 2012 was such an event.

So after seeing and hearing about all this all day in 2012, the mood was broken by my daughter, who would be heading to Virginia Tech the very next year. She had gotten into Girls State, so I suggested we all go out to eat to celebrate, and be away from the nonstop television shows displaying video of what happened in 2007.

We had a great time, ate great food, and it was on its way to being a special memory.

Then we came home. The phone rang.

The voice on the other end said the other words I'll never get out of my mind: “Oh God, you don’t know do you?”

Regardless our persuations on other days, on April 16, 2007 we were all Hokies.

1 Cancel Reply
Regardless our persuations on other days, on April 16, 2007 we were all Hokies.
Cancel Update Comment

Will always remember seeing this the next morning 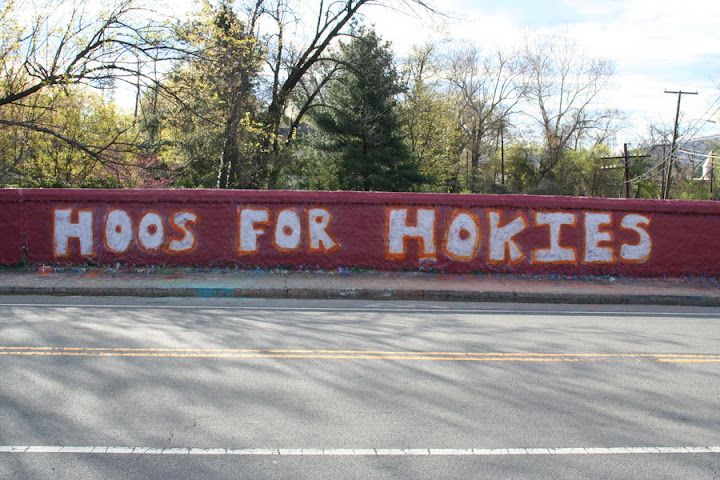